The Hidden Trading Secrets of Wall Street (Part 5 of 7)

Did you know the market is full of seduction?

It's true. Why not? Where else can you throw $1000 and have it magically turn into a sizable multiple in a short period of time?

With this incredible investment opportunity comes a lot of distractions. These distractions can and will lead many people down the wrong path. A path that looks great at first, but ends up being nothing more than a path to nowhere...

In this installment of Trading Secrets we will address this issue along with how good traders approach various seductive elements of the market.

Here's What You Will Discover:

(00:22):
Hello and welcome back to seven trading secrets, underground wisdom. They hope you will never know. I'm Jeremy Whaley. And in this particular video, we are getting into secret number five, secret number five. And it's really simple. If you want to be an effective trader, you have to learn to avoid seduction, avoid Synnex. And what in the world could seduction have to do with the stock market? Well, let me, uh, share this in maybe an image. Have you ever seen this meme of the distracted boyfriend strikes a boyfriend here? He's got the perfectly good girl on the right, but the girl in the red dress. Oh, it's always the girls in the red dress, right? In this particular metaphor, the boyfriend is the trader. The girl on the right is the proven system and the red dress. It's the seductions. Now this is kind of comical, I suppose, but you know what?

(01:19):
We really do this in the world of trading. It's so easy to get distracted. And in the world of trading those seductions come in the form of strategies, it comes in the form of hot tips and it comes in the form of the so-called experts on TV or in the newsletter writers or the different places that we allow to come into our life. And then they distract us. And then we start to think that, you know, what, what I'm doing is not going to work. There's something better out there and you start going and looking for it. When the reality is a proven system that you've mastered is going to be a whole lot more effective in the longterm than probably any of these deductions that come along. All right. But let's talk about each of these and let's start off with the truth about strategies.

(02:01):
Now. I love strategies. I'm consider myself an options trader that's probably 99% of the trades that I do are options. And, uh, that's great, but here's the reality. They can be a distraction. It can be a seduction. In fact, it was one of the ways that I got seduced early on in my trading career. The way that I ended up as an options trader is, um, not long after I blew out my first trading account. So you've kind of heard a little bit about my 1999 story. When I started trading eventually blew it. Trading account out, kind of took a little sabbatical for, you know, maybe eight or 10 months. And eventually I came back to the world of trading and I was still really interested in it. But this time I was like, you know what, I'm going to get some education. So I went and I paid $5,000 almost for some classes.

(02:49):
It was a two day workshop where they were going to teach me. I can't remember. It was like, you know, 14 or 16 different strategies that are perfect for every market condition. And you make money. The stock goes up, make money, stock goes down. You can always make money with these strategies. And you know, to me at, you know, what, 22 or however old I was at a time, I'm thinking, this is it. If I just have more strategies, then I can really beat the market. And so I go through this training and I'm really diligent and I learn all the different strategies. And then I go put my money in the market and I actually got rewarded my very first trade. Uh, well, these new strategies, I made like $4,000, which was, you know, to me, may as well, been a million dollars. It was more money than I ever made in the market.

(03:28):
So I was so excited about it. But then I proceeded to lose that and eventually blew that account out. And you say, well, how could you do that? You have all these strategies. And that's because the strategies were not the answer. What the strategies did is they pulled me off of the game. They got me distracted. They got me working at a billion ways to play the market. And they never answered the most important question, which was which direction is the stock going? You see, they didn't teach me that. And so I fell into the trap of getting distracted with strategies. Now don't get me wrong. Strategies are great. And I teach a lot of strategies and there's a strategy for everyone. And, you know, once you've learned how to do good market analysis, which I teach in, you know, so many different programs that I do, but the most fundamental one, if you've not been through it is my pick winning stocks challenge, which is a 21 day program where you're going to learn how to pick the direction of the trade.

(04:22):
And if you come out of that program, you, you know how to pick the direction of the trade. Now you're ready for the strategies. But if you've not been through something like that, if you don't know how to pick the trade direction, strategies are nothing but a distraction. And then once you do know how to pick a trade direction, now you just want to go through some strategies, find one or two or three that really worked for you and your personality and get really good at those rather than getting distracted with the hot new XYZ, because here's the reality folks. The hot new strategy is probably not a hot new strategy. Uh, in fact, one time I'm almost ashamed to admit it once upon a time, once upon a time, many years ago, I created a new strategy and it wasn't a strategy that was new at all.

(05:00):
It was, uh, something called a a, um, I, well, I called it the squirrel trade. I call it the squirrel tree because you know, squirrels are like, you know, they're undecided. They can't decide which way they want to go. They stare at you in the road. You're like playing and with a squirrel, it's like, ah, which way we're going to go, which way we're gonna go. And finally, the squirrel runs off. Well, there was a strategy Z with options where you can do that, but we don't call it a squirrel tree. I just made the name up. But you know what? Some people are like, Oh, I got to know, learn the squirrel trade. Cause it's going to be so cool. There was nothing to it. It's just that simple option. Straddle is just the most normal thing in the world, but the squirrel trade center, it's so exciting, active, there'll be seduced folks.

(05:39):
Don't be seduced by the hot new strategies. Uh, next little secret for you here. Um, the hot tips very rarely is the hot tip, a hot tip. And when it is a hot tip, usually it's already cooled off. Now, you know, not too long ago, you might've heard about GameStop. And this was a trade that was, you know, probably worth maybe, you know, 30 bucks a share, but, uh, maybe 20 bucks a share, but some people are on a web forum got together and they basically pumped this thing up to over $400 a share. And they did this to drive out short sellers. Okay. Had you known that this group of people, millions of traders were going to go do this. That would have been a hot tip, but you know, the odds of that, that's like a once in every hundred and 50 years of the market, that that kind of thing happens.

(06:28):
Don't follow the hot tips. The reality is folks it's so much more predictable to large degree trade analysis, learn to pick the direction of the trade and then apply an appropriate strategy and do that consistency within a consistently, within a routine. So much more profitable to learn how to do that than it is to constantly looking for the new strategy, constantly be looking for the new hot tip. So again, avoid the seduction. And then another one is the so-called experts. And I always say the experts on TV because that's where people seem to find them. But you know, it could be the experts sending you a hot tip newsletter in your email box or in your actual physical mail or wherever it is. And you know, a lot of times these are probably well intended people, but a lot of these people never actually trade the market at all.

(07:12):
In fact, most of them never trade the market. That's the reality. And most of them, their analysis is flawed. And here's the, here's just the cold facts. I've taught so many people how to trade the market. And if you will learn how to just do the three steps that I've talked about in these seven secrets, if you learn how to do the, the pick, the direction of the trade, do some good analysis, pick the direction. If you learn how to apply the appropriate strategy, which is quite simple, once you pick the direction and you've learned how to manage your risk, I promise you, you can beat those so-called experts. You can absolutely do it. You can sit down. I've had students that have, that have done this, where they'll watch all the shows on a Saturday morning on like CNBC or Sunday morning shows. And they watch all these trade picks, these different people pull out.

(07:55):
And so then they'll go look at the stock and they'll do their analysis. And my students will be right. And the people on TV will be wrong consistently over and over again because folks, trading's not that hard. It can be simple, but you know, when it gets really hard and it gets really hard when you start being seduced, you start being, you know, falling for the seductions and being seduced into something. That's a distraction. And once you start getting into the distractions, guess what? Boom, you're off. You're gone. Okay. So here's the truth folks. When you learn to do good analysis, you can and will beat all of these so-called experts and you'll be able to absolutely crush the market. In fact, don't forget the stats. 93%, any 3% of fund managers, underperform the S and P wow, it's a stunning statistic. Folks. Never forget that fact, these so-called professionals are really professionals because we've elevated them to that level. Not because they're actually better than everybody else. So here's secret number five, forget the seduction, avoid this deductions, find your game, play your game. And you can absolutely beat the market. 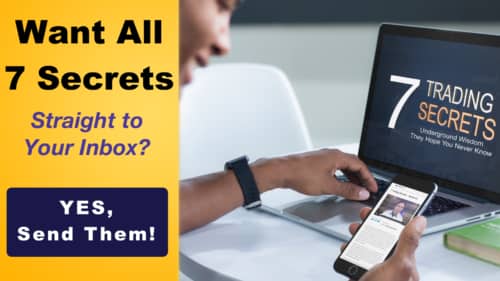 Are You Ready to Become A Maestro?

Whether you are a brand new trader or a seasoned veteran there is always something new to learn. Get started today and discover how easy it really can be to trade the stock market!

Get All 7 Secrets Delivered To Your Email Inbox!